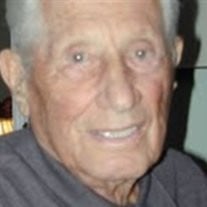 August F. Rizzuto, 96, of Hobe Sound, Florida, with great love for his family, friends and life, passed away July 21, 2013. Known as Gus, he was born in Flushing, Queens, New York and moved to Hobe Sound 20 years ago from Roslyn Heights, New York. He was a member of St. Christopher's Catholic Church in Hobe Sound. Gus was a veteran, having served his country during the Second World War in the European Campaign as a member of the U.S. Army 8th Air Corp. After serving in the war, he returned to New York and began a distinguished career in the automobile business on Long Island, most notably with Chevrolet and Oldsmobile. He was a lifelong member of The Knights of Columbus, and a Past President and Paul Harris Fellow for Rotary International. As an avid golfer, he was a member of Brookville Country Club in New York and Martin County Golf Course where he last played earlier this year. Gus loved sports, his New York Yankees, cooking, talking about food, Florida and politics but mostly about his family. Gus loved and dedicated his life to his beloved wife and five children. He is survived by his wife Jeanne Ann of 59 years; sons, Paul and his wife Lori Ann; Edward and his wife Kate Kennedy; Philip and his wife Tracey; Daniel and his wife Regina; daughter, Nancy; brother, Frank and his wife Rose Ann; sister-in-law Sylvia; 12 grandchildren, Mary Kate; Philip; Daniel Jr.; Fay; Michael; Caroline; Sam; James; Elizabeth; Brendan; Benjamin; and Annabelle. Gus was predeceased by his older brother Louis. A memorial mass will be held Tuesday, July 30th at 10:30 at St. Christopher's in Hobe Sound. Services will be held in the Northeast at a later date. In lieu of flowers, the family requests that memorial contributions be made to the Down Syndrome Society of Rhode Island at 99 Bald Hill Road, Cranston RI 02920. (401) 463-5751 or www.dssri.org. Please visit our tribute wall to share a memory of Gus or to send a condolence to his family. .

August F. Rizzuto, 96, of Hobe Sound, Florida, with great love for his family, friends and life, passed away July 21, 2013. Known as Gus, he was born in Flushing, Queens, New York and moved to Hobe Sound 20 years ago from Roslyn Heights, New... View Obituary & Service Information

The family of August (Gus) F. Rizzuto created this Life Tributes page to make it easy to share your memories.

Send flowers to the Rizzuto family.