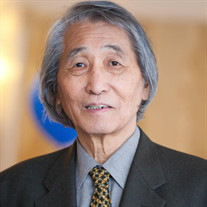 Chang Nam An, a longtime resident of Garden City, NY, passed away on January 23, 2021 at the age of 77 after a valiant battle against COVID-19. Born on December 11, 1943 and a native of Korea who immigrated to the United States, Chang was the epitome of human perseverance. The son of a prominent family from northern Korea before the war, Chang, his parents and siblings had to escape to the south in order to avoid an uprising that would have cost them their lives. Chang and his family started over in Seoul led by his father, Man Keum, a law professor, and his mother, Oh Kee, considered the strength of the family. Throughout his childhood, Chang was an ardent athlete, especially when it came to soccer, often practicing for hours a day before and after school. Chang went on to graduate from Dankook University where he was one of the earliest Koreans to participate in organized American football, playing quarterback. While serving his mandatory military obligation in Korea, Chang was a member of a special unit participating with other countries under United Nations Command. Chang eventually met his wife, Jeanney, and they decided to immigrate to the United States in the 1970s, to build a better life together. After more than a decade of marriage and many tribulations, Chang and Jeanney welcomed their first son, Rich, in 1988, followed by another son, Charlie, in 1990. Chang was a constant presence in the lives of his children and considered them his pride and joy. After many years of hard work, often working 16 hour days, 7 days a week, to build up his businesses, Chang was able to create a comfortable life for his wife and children. Throughout all this hard work, Chang always made time for his family and was constantly present at his boys’ games and school functions. He knew that all the hard work he and his wife put in was so that his boys could have the best opportunities to succeed in life. At the age of 63 Chang faced yet another hurdle in his life, a cancer diagnosis, right around the time his oldest son was entering college and his youngest was still in high school. After battling for his life once again and putting up a strong fight Chang was able to beat cancer. With a new lease on life, Chang took every opportunity to enjoy life with his family while pursuing his love for golf and karaoke. Chang succeeded and accomplished his mission in life with both his sons graduating from law and business schools and with the marriage of his sons to wonderful women who he considered his daughters. A father who would do anything for his boys, Chang’s unending love extended to Rich’s boys, Harry and Jack. A doting grandfather, the birth of Harry and Jack gave Chang a new joy and purpose in life that only a grandparent can ever experience. Nothing made Chang happier than being able to see his grandsons and hearing them laugh. Chang was Harry’s best friend and while Jack was too young, his love for Chang was so real. Chang met every obstacle in life head on with no fear by putting his faith in God and knowing he had the everlasting support of his family. Chang was cancer-free for 14 years before he caught COVID-19 just after Christmas despite the many precautions he took to keep him and his family safe. Despite initially mild symptoms, Chang’s condition took a tragic turn one week after his diagnosis and he succumbed to the disease after a two-week hospital stay. After all the struggles and triumphs in his life, Chang lost this fight but will forever be remembered as the glue of his family, the one person who could always bring people together and celebrate the joys of life. Chang is survived by his loving wife, Jeanney, his two sons Rich and Charlie and their respective wives Iran and Magen, his beloved grandchildren Harry, Jack and Penny, numerous siblings, cousins, nephews and nieces, and every other person who was fortunate enough to have Chang as his friend. The lasting impact that Chang left on this world and those who knew him will never perish and every person he touched will remember Chang An as someone who made their lives better. Rest in peace, a great man who never sought attention but made tremendous waves. Visitation in accordance with NYS Covid 19 guidelines will be Friday Jan.29th 11:30-12:30PM at Roslyn Heights Funeral Home 75 Mineola Ave. Roslyn Heights NY. Interment will follow at Pinelawn Memorial Park, Farmingdale NY. New York State Covid-19 Guidelines: Using guidance from public health officials face masks are mandatory in the facility. At this time, no more than 30 visitors are permitted within the funeral home at a time. Our staff may ask visitors to wait outside the chapel, outside the funeral home, or to keep their visit brief so as to allow others an opportunity to mourn. Some churches and cemeteries will have different limitations on attendance, and as such some visitors may not be able to participate in funeral or burial services.

Chang Nam An, a longtime resident of Garden City, NY, passed away on January 23, 2021 at the age of 77 after a valiant battle against COVID-19. Born on December 11, 1943 and a native of Korea who immigrated to the United States, Chang was the... View Obituary & Service Information

The family of Chang Nam An created this Life Tributes page to make it easy to share your memories.

Send flowers to the An family.