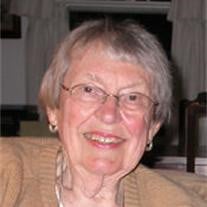 Christine R. Pines, age 91, a 56 year resident of Port Washington, died at home on January 24, 2013. Born in North Carolina, Christine was a graduate of the University of Georgia and received her Master’s degree at Teachers College, Columbia University. She was predeceased by her husband Nicholas F. Pines, a real estate broker in Port Washington who died of a heart attack in 1976. After teaching home economics in Georgia for one year, Christine joined the Women’s Reserve of the US Marine Corps and served two years during World War II in Santa Barbara, California where she taught recognition of ships and planes. She came to New York City in 1945 to get her Master’s degree and went to work in the copy department at House Beautiful Magazine, pursuing her degree at night and on weekends. From House Beautiful she moved to Today’s Woman magazine as equipment editor. She spent nine years in the public relations department of J. Walter Thompson Co. working on a variety of food accounts. She left JWT after she and her husband bought their house in Port Washington. She worked as a free lance publicist for 17 years while raising their three children. In 1974 she went back to work full time as the director of product publicity for Best Foods. Christine retired in 1986, returning to free lance publicity. She wrote a number of personal essays about growing up in North Carolina and about life in Port Washington. Two of the pieces were published in the Long Island section of the New York Times, others in North Carolina publications. Mrs. Pines was an active member of St. Stephen’s Church and on the board of the League of Women Voters of Port Washington/Manhasset. She is survived by her son Nicholas Kirby Pynes his wife Marie Fortin and son Evan Pynes of Knowlton, Quebec, Canada; her daughter Christine Pines of Port Washington; her son James Matthew Pines, his wife Jennifer and their 2 daughters, Lela and Lian of Port Washington. A memorial service will be held at St. Stephen’s Episcopal Church in Port Washington. She will be buried with her husband in the National Cemetery in Farmingdale. Memorial donations may be made to St. Stephen’s Altar Guild, 9 Carleton Ave, Port Washington, NY.

Christine R. Pines, age 91, a 56 year resident of Port Washington, died at home on January 24, 2013. Born in North Carolina, Christine was a graduate of the University of Georgia and received her Master’s degree at Teachers College, Columbia... View Obituary & Service Information

The family of Christine Pines created this Life Tributes page to make it easy to share your memories.

Send flowers to the Pines family.