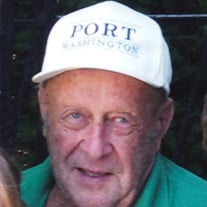 Edward John Tylinski, 93, of Port Washington, NY, passed away on April 16th, 2014. He was born September 19th 1920 on Avenue A, in Port Washington NY, the very same street he grew up on, to the late William and Mary Tylinski. The oldest of five children, he was a lifelong resident of Port Washington. In 1951 he married Dorothy Wheeler from Great Neck NY, who passed away in 2001. Edward is survived by four children: Yvonne of Massachusetts; Gregory (Marlene) of Alabama, Douglas of New York, and George (JoAnn) of Oregon; and three grandchildren: Nathalie, Melissa, and Hazel. He is also survived by his brother Tom Tylinski and sister Anne Hoens, both residing in Florida. He was preceded in death by sisters Agnes Slaney and Genevieve Race, both residing in Florida. Mr. Tylinski served in the U.S. Army, 92nd Cavalry Reconnaissance Unit of the 12th Armored Division (combat in France) from October, 1942- December, 1945, and received two bronze medals for bravery under fire. He was a long-time member of VFW post 1819, and was honored to be co-grand marshal of the Port Washington Memorial Day Parade in 2004. See http://www.antonnews.com/portwashingtonnews/2004/05/28/news/ for military service. He owned and operated Edward Tylinski Ice & Fuel Service in Port Washington for over 50 years, often contracting for Lewis Oil Co. He worked tirelessly, helping people out in the harshest of weather at times, and enjoyed the many friends and acquaintances he made along the way. He knew the town well. Edward was active in the Polish Club and served for five years as financial secretary from 1952 to 1957. He spoke Polish and was a talented accordionist and polka fan, occasionally playing accordion there at “the Club”, “the Polish Hall”. In memory of Edward Tylinski his family will be receiving friends and relatives at a memorial visitation on Saturday May 17th 8:30am to 9:30am at the Roslyn Heights Funeral Home, 75 Mineola Ave. Roslyn Heights, NY (RoslynHeightsFH.com). A memorial prayer service & eulogy will follow at the funeral home from 9:30am to 10:15am. Interment will take place at the Nassau Knolls Cemetery Port Washington, NY. Following the interment family and friends are invited to a light repast buffet in memory of Edward at the Polish American Cultural Association 5 Pulaski Place Port Washington, NY 11050. In lieu of flowers, donations in memory of Edward Tylinski may be sent to: PACA (Polish American Cultural Association) 5 Pulaski Place Port Washington NY 11050

Edward John Tylinski, 93, of Port Washington, NY, passed away on April 16th, 2014. He was born September 19th 1920 on Avenue A, in Port Washington NY, the very same street he grew up on, to the late William and Mary Tylinski. The oldest of five... View Obituary & Service Information

The family of Edward J. Tylinski created this Life Tributes page to make it easy to share your memories.

Send flowers to the Tylinski family.