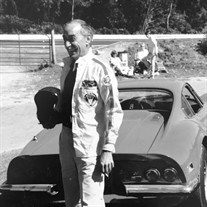 Guy Ladd Frost, 1934 - 2019 It is with great sadness that the family of Guy Ladd Frost announces his passing on Thursday, March 14 at the age of 85. Architect, preservationist and motorsports enthusiast Guy Ladd Frost was born on January 17, 1934 in Brooklyn, New York to Rose and Stanley Frost. Throughout his childhood, the family travelled from Brooklyn to New Zealand, Australia, West Virginia and North Dakota, where they finally settled. Guy attended High School In North Dakota, along with his three siblings, Paul, Carol and Mary. Guy served as an Aircraft Controller in the U.S. Air Force from 1954-1958 and was stationed in Japan and later in Montauk, Long Island. He enrolled in the architecture program at Rhode Island School of Design on the GI bill in 1958. There he met his wife, Donna Dussault, who was studying illustration. The two married on Memorial Day, 1959 and spent summers working in Montauk while completing their degrees. Upon graduating from RISD, Guy and Donna moved their family to Long Island, New York, and bought a home in Roslyn in 1965. Guy was taken under the wing of master preservationist, Admiral Roger Gerry, and together they worked for 25 years restoring the more than 50 structures in Roslynʼs Historic District, including the Ellen E. Ward Clock Tower. The Frosts purchased a small home in Springs, East Hampton in 1973 and Guy pursued his love of motorsports at the Bridgehampton Race Circuit, participating in regional events as a Sports Car Club of America driver and steward. In 1981, Guy founded the Bridgehampton Racing Heritage Group, dedicating himself to the preservation of this historic race track. He continued to organize events highlighting the history of Long Island car racing even after the track was closed in 1998. Guy is survived by Donna, his wife of 59 years, and three children Erica (Ronald) French, Christoper (Kimberle) Frost and Jessica Frost, as well as his five grandchildren, Theadora, Ryland, Matthew, Daniele and Nicole. A memorial service and celebration of Guy’s life will be held on Saturday April 20, from 12-2pm at the William Cullen Bryant Library in Roslyn New York. The library currently holds an archive of his architectural drawings of the historic Village, which he donated when he closed is practice in 2015. Donations can be made in Guy’s memory to the Roslyn Landmark Society. Checks can be mailed to: PO Box 234, Roslyn, NY 11576. Donations can also be made by calling 516-625-4363, or visit the website: https://www.roslynlandmarks.org/ecommerce/ membership.html.

Guy Ladd Frost, 1934 - 2019 It is with great sadness that the family of Guy Ladd Frost announces his passing on Thursday, March 14 at the age of 85. Architect, preservationist and motorsports enthusiast Guy Ladd Frost was born on January 17,... View Obituary & Service Information

The family of Guy Ladd Frost created this Life Tributes page to make it easy to share your memories.

Send flowers to the Frost family.