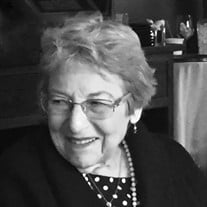 Longtime Long Island resident Jean Koran died peacefully on July 6th, 2020 at the age of 98 in Port Washington. Jean was born in Manhattan in 1922, and remained in the city to attend Hunter College. Briefly leaving New York to work on behalf of the WWII effort at the U.S. Map Service in Washington D.C., Jean met a U.S. Marine who became her husband—and dancing partner—of 58 years, Sidney W. Koran (1912-2002). Back in New York in 1955, the couple, along with their two young daughters, settled in their beloved, permanent home of Port Washington. The family joined the congregation of the newly formed Community Synagogue, while Jean became a longtime member of its book club. Active in the Knickerbocker Yacht Club until its closure, Jean went on to join Manhasset Bay Yacht Club. Her passion for lifelong learning among friends led her to join additional book clubs and civic groups in Port Washington, as well as in her winter home, Palm Beach Gardens, Florida. Jean was an artist who enjoyed a 26-year career teaching art in the Port Washington schools. Upon earning her master’s degree, Jean joined the National Art Educators Association, providing leadership to its Long Island division and ultimately serving as president at the New York State level. As a young college student, Jean had worked as a docent at the Metropolitan Museum of Art; upon retiring from teaching, she once again became a docent—at the nearby Nassau County Museum. Jean continued painting throughout her life, and many of her original portraits hang permanently in the hallways of the Amsterdam Harborside retirement community where she last resided. While Port Washington was her true anchor, Jean was an avid traveler. An award-winning painting by one of her students earned Jean her dream trip to Japan, and her last major trip was to Viet Nam when she was past the age of 90. A strong swimmer, a competitive golfer and bridge player, a joyful hostess, Jean delighted most in sharing her life with her fellow travelers, athletes, players, and her adored and adoring friends and family. Jean is survived by her daughters, Leslie Friedman of Newton, MA, and Patricia Hadley and husband Ronald of Sea Cliff and Southampton, NY; her grandchildren, Jessica Hewitt and husband Daniel of Providence, RI, Robin Ketro and husband Paul of Boston, MA, and Jamie Hadley of Sea Cliff, NY; and her great-grandchildren, Riley and Caroline Hewitt of Providence, RI, and Violet Ketro of Boston, MA. Jean is also survived by her sister-in-law, Janet Steinberg, and her nieces, Lori and Amy Steinberg of New York, NY. A memorial service for Jean will be hosted via Zoom on July 16th at the Community Synagogue in Sands Point, New York. In lieu of flowers, Jean’s family requests that donations be directed to the Metropolitan Museum of Art’s education programs. Gifts may be made online at: https://rsecure.metmuseum.org/donate?cs=43469 Or by mail to: The Metropolitan Museum of Art 1000 Fifth Avenue New York, NY 10028 Attn: Development Office Please indicate that your gift is in Memory of Jean Koran and for Education.

Longtime Long Island resident Jean Koran died peacefully on July 6th, 2020 at the age of 98 in Port Washington. Jean was born in Manhattan in 1922, and remained in the city to attend Hunter College. Briefly leaving New York to work on behalf... View Obituary & Service Information

The family of Jean Koran created this Life Tributes page to make it easy to share your memories.

Send flowers to the Koran family.