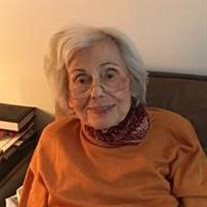 Joan Mann Friedman passed away on January 20, 2020 at the age of 96. Since 2002 she had lived in Port Washington, New York. Joan was a smart, independent and scrappy survivor. In the 1970s she co‐ founded Educational Exhibitors, a company that provided traveling exhibits to schools across Long Island. In the mid 1970’s her company was asked to help organize an exhibit at the White House in Washington, D.C. for the Bicentennial called “Remember the Ladies”. Widowed in 1976 at the age of 52, she interrupted her career to manage her husband’s jewelry business until it could be sold. In later years she enjoyed working for the Nassau County Museum and the Roslyn Landmarks Society. Joan was a true lifelong learner. In her late 70s and early 80s she attended classes at Nassau Community College, taking copious notes during every lecture. Joan Alice Mann was born on November 14, 1923 in New York City, the daughter of Jacob and Evelyn Mann (nee Weiss). She attended public school in Queens and like many bright students she advanced rapidly, graduating high school at the age of 16. She graduated from Vassar College in 1944 and then received a Masters from Columbia University Teachers College. Joan taught art in a New York City public school until her marriage to Irving Friedman whom she met through her younger sister Connie’s beau, Robert Greiff. Irving and Bob were friends from the Rockaways and they both married Mann sisters in the early 1950s. In 1954 after the first of their three daughters was born, Joan and Irving moved to Roslyn, New York. While she had a passion for bird‐watching and long walks on Long Island, Joan always felt a strong draw to the cultural offerings in New York City. The family often visited MoMA or the Metropolitan Museum, and frequently attended Ballet or Theater performances. Joan continued to drive into the City alone (at top speed) into her eighties for concerts or museum visits. Joan was the consummate mother, homemaker, and collector with eclectic taste and a keen eye for art and mid‐century design. She was also an adventurous cook, always eager to try exotic foods and new recipes. Joan is survived by her sister Constance Greiff, her daughters Janet Mann, Evelyn and Barbara Friedman, her sons-in law Joshua Nefsky and Tom Demuth and grandchildren, Cooper Nefsky and Amanda Mummery. When Joan met someone new, she always found something to compliment them on, yet in the past few years she found great pleasure in reading her book of Shakespeare’s insults. In lieu of flowers, please consider a contribution to your favorite arts or environmental organization.

Joan Mann Friedman passed away on January 20, 2020 at the age of 96. Since 2002 she had lived in Port Washington, New York. Joan was a smart, independent and scrappy survivor. In the 1970s she co&#8208; founded Educational Exhibitors, a company... View Obituary & Service Information

The family of Joan Mann Friedman created this Life Tributes page to make it easy to share your memories.

Send flowers to the Friedman family.