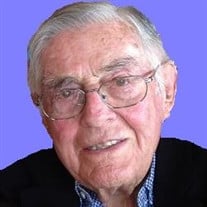 Joseph Emidio Mele passed away August 6, 2019 at age 98. He was engaged in life to the end moments and enjoyed a cigar and family dinner on his last day . Joseph was born in Greenwich Village New York to Lucia Pascale and Emidio Mele on February 21, 1921. He served in the US Army in World War II in Harbor Craft Units which ferried cargo to the landing barges prior to the Invasion of Normandy. He was predeceased by his wife Elizabeth Ann Schindler in 1966, and raised their five children as a single parent. He was also predeceased by his wife Muriel Mele in 2009. Joseph was an outstanding athlete at Erasmus Hall in Brooklyn, New York where he memorably pitched a no-hitter. He attended St. John’s University and after the war earned his degree at Drew University where he played baseball under the mentorship of “Doc” Young. He joined the Mele Jewelbox Company founded by his father in 1912, which is now run by a third and fourth generation of Meles. The company would flourish under his keen eye for trends in the marketplace and his understanding of design. Every young girl in the US delighted in their musical pop-up ballerina jewelry box! He loved sailing, and was a gifted amateur cinematographer; his films will be deposited in the National Archive of Home Movies in San Francisco. Joseph was a deeply cultured man who loved the theater and music. He was a Broadway investor, (notably “Hello Dolly”). He was involved in many philanthropies throughout his life. He was a staunch supporter of Drew University, Our Lady of the Hamptons Regional Catholic School, and various charities in Utica, New York home of The Mele Company. Enthusiastic golfer and fierce competitor throughout his life: he even found opportunity to play in Rouen, while serving in the US Army in Europe. He was a member of the Shinnecock Golf Club, the New York A. C., and Delaire Country Club. He lived each day to the fullest, cherished his children, grandchildren and great grandchildren, and enriched the lives of all who knew him. He was a dear friend and mentor to many. He was predeceased by his brothers Edward, Raymond Robert, and Howard. He is survived by his five children: Dorothy E. Mele (Christine Danelski), Roberta A. Mele, Elizabeth A. Reed (Robert Reed), Raymond R. Mele (Dawn Farrell) and Joseph E. Mele Jr., eight grandchildren: Elizabeth J. Hoffman (Mike Hoffman), Alexandra R. Thompson (Mark Thompson), Julianne R. Mele, Victoria N. Mele, Andrew Joseph Mele (Leatrice Mannie), Kathryn A. Girard (Steven Girard), Joseph J. Reed ( Steff Monsalve) and Edward J. Reed (Ashley Reed), and two Great grandchildren: Julia Thompson, and Andre Mele, six nieces and nephews and by his loving companion Sivia Elgart. Donations may be given in his honor to The American Heart Association. Visitation will be held on Monday 2-4PM & 7-9PM at Roslyn Heights Funeral Home 75 Mineola Ave. Roslyn Heights, NY 11577. Funeral Mass Tuesday 10:30AM at St. Peter of Alcantara Church Port Washington, NY. Burial to follow at Mt. St. Mary Cemetery Flushing, NY. A Memorial in Delray Beach, FL to be announced.

Joseph Emidio Mele passed away August 6, 2019 at age 98. He was engaged in life to the end moments and enjoyed a cigar and family dinner on his last day . Joseph was born in Greenwich Village New York to Lucia Pascale and Emidio Mele on February... View Obituary & Service Information

The family of Joseph E. Mele created this Life Tributes page to make it easy to share your memories.

Send flowers to the Mele family.