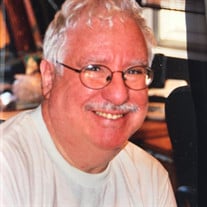 Marc Schles passed away Thursday, January 21, 2021 at the age of 74 while at North Shore University Hospital, Manhasset where he was being treated for Covid-19 complications. He will be deeply missed by his wife of 41 years, Andrea and their two children, Eric and Alexa as well as Eric’s spouse, Mel. Marc was born May 20, 1946 in Brooklyn, New York to Murray and Estelle Schles, and was the oldest of four brothers. His father had his own cabinet making business for many years and ended his career as Superintendent of Buildings and Grounds for the county of Rockland, N.Y. His mother was a Mail Clerk for Rockland County. While growing up Marc developed a love of math and while attending Samuel J Tilden High School was Captain of the math team. During his senior year he was the recipient of the prestigious Ford-FSA Future Scientists of America award. Other childhood passions included chess, stamp collecting and classical music. He received his BA from Brooklyn College after which he entered the computer industry in New York City starting out as a programmer and eventually becoming an IT Developer. During the course of his career Marc worked for top NYC banks and brokerage houses including Credit Suisse First Boston, Morgan Stanley, UBS, Lehman Brothers, Goldman Sachs, Citigroup, Barclays Capital and BNP Paribas. In his private life he was a seeker of spiritual truth and became part of the vibrant spiritual scene in New York City around Hilda Charlton in the late 60’s. She eventually sent him to India to see Bhagavan Sri Sathya Sai Baba in 1971. Sai Baba and his teachings became the guiding spiritual force of Marc’s life. Between trips to India Marc attended Sai Baba centers in Nassau County, NY and eventually the Flushing Sai Baba Center in Queens, NY. During another trip to India in 1974 he met his future wife Andrea, another young westerner staying at Baba’s ashram. They married in 1981. One of the greatest joys in Marc’s life were his children Eric and Alexa, born in 1985 and 1990, whom he adored. Upon his retirement from IT, Marc redirected his energy and focus to the stock market and excelled in trading his own portfolio during the last two years of his life. Marc is also survived by his brother Robert and his wife Sarah, his brother Ken and his wife Maggie, and his brother Alan’s wife Lorraine in addition to nieces and nephews Rachel, Laura, Samantha, Andrew (and his spouse Edwardo), Jeffrey (and his spouse Sara), Julia and Jacob and his grandniece Cecelia. He was predeceased by his brother Allen who is survived by his widow Lorraine Mari and also his uncle, Marvin who is survived by his wife Mindy of Massachusetts. Marc was cremated through the Roslyn Heights Funeral Home in Nassau County, Long Island. There will be a private online zoom meeting memorial for him in the near future.

Marc Schles passed away Thursday, January 21, 2021 at the age of 74 while at North Shore University Hospital, Manhasset where he was being treated for Covid-19 complications. He will be deeply missed by his wife of 41 years, Andrea and their... View Obituary & Service Information

The family of Marc Stephen Schles created this Life Tributes page to make it easy to share your memories.

Send flowers to the Schles family.