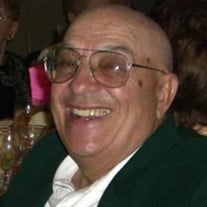 Michael F. Mongelli, formerly of Flushing, New York and residing in Huntington, New York, died on April 23, 2020 at the age of eighty-six (86). Born June 16, 1933 in Astoria, New York, as the youngest of five children of Gerard and Grace Mongelli, he began to work in butcher shops even prior to high school. After his discharge from the Army in 1955, he opened “Michael’s Prime Meats” on 162nd Street in Flushing where it was an institution for almost forty (40) years. “Mike the Butcher” always had a smile on his face and a pot of coffee brewing on his butcher block for all his customers. Michael was blessed to meet and marry Theresa Clarke and produce two sons, Michael and Lawrence, who joined their parents in working in the butcher shop as children, and continued through their college years, where many life long skills and lessons were learned. In addition to his aptitude with a knife, Mike also became quite handy with a wide variety of tools as he and Theresa purchased several homes and buildings over the years. Larry and Michael, as well as many friends and relatives, participated in the renovations where scores of funny and endearing stories were created during the countless hours spent together at the various project sites. Mike enjoyed playing craps and continued to travel to Mohegan Sun Casino through June 2019 where he was joined by several of his grandchildren. “Pop Pop” to all the grandchildren, Mike was a steady presence at countless baseball, football, basketball, and lacrosse games. He and Theresa were extremely loving and generous parents who began a tradition of annual family ski trips in 1987. After the untimely death of Theresa in 1991, Michael was fortunate enough to meet and marry another widower, Barbara Martini. The annual Mongelli ski trips continued with Barbara’s grandchildren often joining the group. Michael enjoyed his golden years traveling with Barbara and taking walks in Sunken Meadow Park. They had just celebrated their 25th wedding anniversary earlier this year before Michael became ill during the Covid-19 pandemic. Michael leaves behind Michael (Leana); Larry (Lisa); seven grandchildren: Danielle (Biagio); Lawrence (Courtney); Michelle; Michael III; Marco; Matthew; and Maximus; a great-granddaughter Gia as well as Barbara’s children: Donna, Dawn, Joy (Joe) and their children Matthew (Jessica); Heather; Mitchell; Barbara; Brianna and great-grandchildren Kayla and Addison. Michael also leaves behind his sister Angelina Stringer and many beloved nephews and nieces. Memorial services celebrating his life will be held later this year.

Michael F. Mongelli, formerly of Flushing, New York and residing in Huntington, New York, died on April 23, 2020 at the age of eighty-six (86). Born June 16, 1933 in Astoria, New York, as the youngest of five children of Gerard and Grace Mongelli,... View Obituary & Service Information

The family of Michael F. Mongelli created this Life Tributes page to make it easy to share your memories.

Send flowers to the Mongelli family.