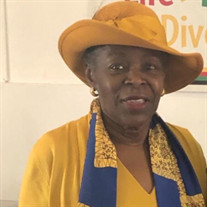 The Early Years Minnie Lee Howard was born on November 11, 1946 in Perry, Georgia to the late Allen and Maude Howard. She matriculated through Houston County training schools and attended Kings Chapel Church. She loved music and reading, and although it’s not widely known, she was a humanitarian who cared deeply about the injustices of the world, and once dreamed of joining the Peace Corps. In 1966, she left Georgia for New York to expand her horizons and search for new opportunities. Although she traveled far from home, she never forgot her southern roots. The Middle Years Minnie settled into Great Neck, Long Island where she cultivated a new community, and became known among her friends for being extraordinarily generous. She was a giver and went out of her way to serve people - always sacrificing for others, providing gifts, visiting the sick, and extending help financially to those in need. She was exceptionally creative, loved flowers, fashion and beautiful decor. Over the years she hosted numerous parties and holiday gatherings where she loved to dance and entertain. Minnie also had a larger than life personality that was extremely magnetic. People were drawn to her great sense of humor, honesty and outspokenness. It’s been said that “she never met a stranger,” and treated new acquaintances as though she had known them for years. Minnie was also an enormously hard worker, and held several different occupations. She gave her all to her children. The years of humility and hard work paid off, when as a single mother she raised her two daughters, supported them through college, and encouraged them to fulfill their dreams. The Golden Years In her elder years she loved travelling with her eldest daughter to civil rights and cultural museums, and attended Broadway musicals and concerts with her younger daughter. At one music concert hosted by “The Five Blind Boys of Alabama,” she enjoyed the music so much that she left her seat and literally danced in the aisles. She became a member of the Saint Paul AME Zion Church and served on the Pastor’s Aide Board. Outside of church she immensely enjoyed the preaching of Bishop T.D. Jakes. Going Home to Glory On the evening of Saturday, May 23, 2020, God called her home. She passed peacefully from life here to everlasting life with the Lord. She was loved dearly, revered fondly, and will be missed deeply. Her passing was preceded by her parents Allen Howard and Maude Stripling Howard; sisters, Rosa Lee Walker, Willie Maude Howard; brothers, Clarence Howard, Richard Howard, Robert Howard, and Allen Howard Jr. To honor the beauty of her life and legacy she leaves her daughters Paninda Johnson (Winston) (Houston, TX), Erika Howard (Great Neck, NY). To cherish her memories she leaves her sister, Sadie Howard (Warner Robins, GA); brothers, Calvin Howard (Geraldine) (Warner Robins, GA), Troy Howard (Conyers, GA), Henry Howard (Patricia) (Hempstead, NY), JB Howard (Perry, GA), and Albert Howard (Claudia) (Lake City, FL); niece, Fay Chambers (Lonnie) (Brentwood, NY); cousin, Phyllis Williams; dear close friends Alneta and Vandelyn Moody, Willis and Colin Gibson, Nancy Cheatham, Opal Flowers, and a host of nieces, nephews, relatives and friends.

The family of Minnie L. Howard created this Life Tributes page to make it easy to share your memories.

Send flowers to the Howard family.