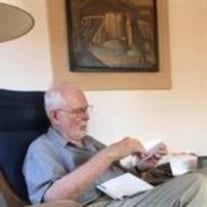 Peter Humphrey Mattson, age 88, of Great Neck, NY, died November 9, 2020, surrounded by his wife Leila Ott Mattson and their three much loved children, Andrew Mattson, Sarah Mattson Weller, and Julia Mattson. Peter was born in Evanston, Illinois to Natalie Humphrey Mattson and Bernard G. Mattson, Jr. Peter attended Evanston Township High School (1949), Oberlin College (B.A., Geology, 1953) and Princeton University (Ph.D., Geology, 1957). Peter and Leila were married in 1954 in Amherst, Ohio, and after Peter graduated from Princeton, they moved to Washington, DC where Peter served as a Geologist for the US Geological Survey. In 1959 they moved to Puerto Rico where Peter continued his work for the USGS, preparing geologic maps and serving as site geologist and petrologist for the National Academy of Sciences Core Hole in Serpentinite. In 1964, Peter was hired as an assistant professor in the Geology department at Queens College. He remained in the department for over 30 years, retiring as a professor in 1998. While at Queens, he served twice as department chair. In his first term as department chair (1965-1968) he helped the then-new department grow from 5 to 13 faculty and 20 to 55 majors and plan the M.A. and Ph.D. programs. He taught several classes over the years including physical geology, natural disasters, and mineralogy. He most commonly taught structural geology and "earthquakes, volcanoes, and moving continents (plate tectonics for non-majors)". Peter's fieldwork included over 80 long and short excursions to 20 states and over 15 countries. Among these were Canada, Mexico, Venezuela, Dominican Republic, Haiti, Cuba, multiple sites in Europe, and St. Peter and St. Paul's Rocks. He was proud of his accomplishments and shared them in 2 edited books, 34 articles, 3 geologic maps, 1 videotape, and several unpublished reports and abstracts. Peter is survived by his wife of 66 years, Leila (Ott), and 3 children, Andrew (Julie Glynn), Sarah (David Weller), and Julia (Michael Ruben). His family accompanied him on several trips including to Leeds, England for a year-long sabbatical, trips to Venezuela and Puerto Rico, field sites in Montana and Wyoming, and many unplanned roadside stops for impromptu geology lessons. After retiring, Peter shifted his attention from digging up rocks and fossils to unearthing ancestors, mapping his family tree back to the Pleistocene. He shared his love of rocks, fossils, and minerals, genealogy, and more generally of science and learning with his 7 grandchildren (Natalie, Nora, and Ella Mattson, Jacob and Jane Ruben, and Maggie and Henry Weller).

The family of Peter Humphrey Mattson created this Life Tributes page to make it easy to share your memories.

Send flowers to the Mattson family.