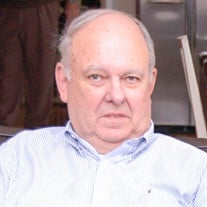 We are saddened to announce the passing of Robert Frank Cunningham, devoted husband of Doris, and father of Robert, David, and Daniel, and brother of Kenneth. Bob was born in the Bronx, NY on 9 June of 1936, the eldest son of Robert Kenneth and Gladys (Adele Stacy). Bob attended Garden City High School where he met his sweetheart and eventual wife (Doris), and played on the tennis team. While in high school, he built a one person, 8 foot wooden hydroplane in the basement in his house. After high school, he went to Brown University (where he was freshman pool champion) and became a member of Sigma Chi Fraternity. Doris (Haynie) left to study at Mount Holyoke College. They married on valentines day in 1958 in Garden City, and honeymooned in Bermuda. Bob went on to earn an MBA at Hofstra University. Doris and Bob took an apartment in Huntington, NY, and a few years later moved to East Northport, NY, moving again in 1972 to the current house in Smithtown, NY. He spent many hours enjoying golf at Cherry Valley Club in Garden City with his brother, business friends and colleagues, and his son David. A highlight for Bob was getting a chance to play two holes with Jack Nicklaus (as a reward for becoming a Master Dealer), scoring the same score (a 3 and 4, for par on each hole). Many weekends would be spent on his boat (the Salty 'C'), fishing, cruising, or traveling to Fire Island and enjoying the beach. Bob's first job was for Hazeltine Electronics; in 1963 he went to work for his father, Dealer Principal of Cunningham Pontiac. Cunningham Pontiac opened by his father in Queens in January 1944. In 1967, Bob became Dealer Principal, joined in 1970 by his brother Kenneth, and they eventually acquired and added the GMC and Buick lines. He enjoyed operating the dealership, often becoming a Master Dealer out of the Richmond Hill, Forest Hills and Bayside locations for many years, with his brother, son and their many loyal employees, until he retired in 2009. Bob Cunningham is survived by his beloved wife, Doris of 56 years; his children Robert (Barbara) Cunningham; David (Pamela) Cunningham and Daniel (Patricia) Cunningham; his eight grandchildren and his brother, Kenneth (Maxine) Cunningham. Viewings will be held, Monday, October 12th, 2015 from 10:00am to 11:00 AM, with services from 11:00 AM to 12:00PM at the Roslyn Heights Funeral Home; 75 Mineola Ave, Roslyn Heights, NY 11577. Tel: 516.621.4545 In lieu of flowers, the family has requested that a donation be made in Mr. Cunningham’s name to the North Shore Animal League; Tel: 516.883.7575 | 25 Davis Ave, Port Washington, NY 11050. http://www.animalleague.org/

We are saddened to announce the passing of Robert Frank Cunningham, devoted husband of Doris, and father of Robert, David, and Daniel, and brother of Kenneth. Bob was born in the Bronx, NY on 9 June of 1936, the eldest son of Robert Kenneth... View Obituary & Service Information

The family of Robert F. Cunningham created this Life Tributes page to make it easy to share your memories.

We are saddened to announce the passing of Robert Frank Cunningham,...

Send flowers to the Cunningham family.