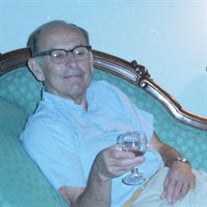 Robert (Bob) Michael Flanagan of Port Washington, New York and Nantucket, Massachusetts died at home on April 3,2022, at the age of 91. Born to an unmarried mother in 1930 in Springfield, MA, he was placed in the care of an orphanage in Boston. His first two years were divided between the orphanage and various foster homes. In 1932, on what Bob often referred to as the luckiest day of his life, Charles and Catherine Flanagan took him into their home in Dorchester, Massachusetts and shortly thereafter formally adopted him. The Flanagans already had one son, Charles (Charlie). The four of them formed a tight-knit family unit. Charles and Catherine had a happy and joy-filled marriage and were kind and loving parents. During their early years, Bob and Charlie spent summers on Nantucket with their maternal grandparents, Eugene and Annie Perry. Bob often spoke admiringly of Eugene, an immigrant from the Azores, who would extend a hand to help people almost without question. The Flanagans and Perrys instilled in Bob a tremendous sense of the importance of family, and of community. Bob attended Boston College High School in Boston, and later St. Michael’s College in Winooski,Vermont, selected in large part because of the access to ski areas in northern Vermont and southern Quebec. While at St. Michael’s, Bob became the editor of the school paper, a job which he greatly enjoyed. He found both the writing and the business aspects to be quite interesting and started to think about future career options. War intervened, and both Bob and Charlie enlisted. Bob attended Officer Candidate School, and was then sent to Giessen, Germany. After completing his service, Bob returned to the United States and enrolled at the Harvard Business School. He soon began dating Mary B. Laird, and the couple were married in June 1956 just after his graduation. During the early years of their marriage, Bob and Mary lived in a succession of places as Bob found his footing in his career. The two oldest children, Christopher and Kate, were born in Boston. The family then moved to Cincinnati, where Sarah was born. Then, it was back to Boston, and on to England. Their youngest child, Martha, was born in Essex, England in 1962. Bob and Mary faced some difficult times during those years. Chris was born with a severe form of autism. Chris’ troubles were a lifelong source of sadness and a continual challenge for the family, as they worked hard to obtain the best care possible. After England, Bob’s career next took the family to San Juan, Puerto Rico, where Bob joined ITT. Bob showed himself to be a strategic thinker (as well as a shrewd financial executive). In January 1967, ITT promoted Bob, and the family relocated to Brussels, Belgium. The family remained in Brussels until the summer of 1971, when Bob moved to the Chicago Pneumatic Tool company in New York, and shortly thereafter to the position of Comptroller at Western Union Corp. He soon became CEO and Chairman. Bob enjoyed quite a few successful years at Western Union, but eventually ran into a patch of bad luck. A satellite launch failed in 1984, cutting off a key revenue source. Not long thereafter, Bob was ousted as CEO. Though that was a crushing blow, Bob was soon back up on the horse. He did some consulting, and then branched out into the new world of cellular communications. In 1986, he and several friends started CCT Boatphone, a company that provided phone service to boats in the British Virgin Islands. The company was later sold to Cable and Wireless. While he was getting the company up and running, Bob lived in Tortola and tended the switchboard himself overnight for several years. Bob was always up and swinging. In fact, one of his favorite sayings was one he got from a motivational poster with a picture of a basketball court: “you miss 100% of the shots you never take.” His tenacity and underlying optimism were his defining characteristics. His children remember some summer days on Nantucket when it was raining out, and there was no hope of getting to the beach. “It’s clearing over in the corner of the sky!”, Bob would say, looking at an entirely overcast sky. Rarely could anyone else detect this clearing, but Bob surely did see it. He always looked for the positive, and he almost always found it. Not surprisingly, Bob always rooted for the underdog. And for the Red Sox. Which were, in some years, one and the same. He seemed almost bewildered when the Sox went the distance. Bob had a great love of music. He spent many of his childhood years, with a close friend (Bob Mooney, of Nantucket), learning the words to the popular songs of his day. He had an amazing memory and could call those songs up and sing them all (not missing a single lyric) some 70 years later. Skiing was another of Bob’s great passions. But, most of all, he loved Nantucket. A deep feeling of content washed over him every time he set foot on the island. Surrounded by his Flanagan and Stover relatives, and his happy memories of his time with the Perrys, Bob was truly in his element. Bob never forgot the lesson he learned from Gene Perry: Family is #1. Bob is survived by his wife of 65 years, Mary (Laird)Flanagan; four children: Christopher, Kate (Richard Whitney), Sarah (Lee Bush)and Martha; and two grandchildren, Benjamin and Marina, as well as numerous nieces, nephews, grandnieces and grandnephews. Donations may be made in his name to DDI of Smithtown, NY; https://www.ddiny.org

Robert (Bob) Michael Flanagan of Port Washington, New York and Nantucket, Massachusetts died at home on April 3,2022, at the age of 91. Born to an unmarried mother in 1930 in Springfield, MA,... View Obituary & Service Information

The family of Robert Flanagan created this Life Tributes page to make it easy to share your memories.

Send flowers to the Flanagan family.