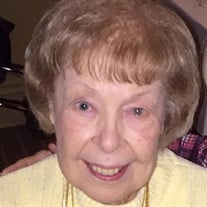 BREEN-SMITH, Thelma (1925-2016) Passed away on April 13th at St. Francis Hospital at the age of 91. Tenth generation descendant of Richard (Bull) Smythe, founder of Smithtown. A lifelong resident of Roslyn Heights, Thelma was passionate about... View Obituary & Service Information

The family of Thelma Smith Breen created this Life Tributes page to make it easy to share your memories.

Send flowers to the Breen family.